Anteroom of the Armoury Chamber

Organized by:
The Moscow Kremlin Museums 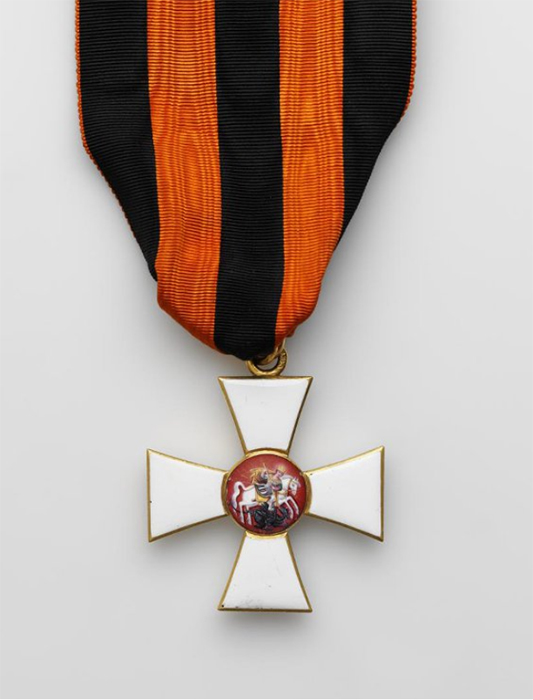 The exhibition is carried out within the framework of the International scientific conference commemorating the 250th Anniversary of the Military Order of St George, organized by the Moscow Kremlin Museums. The idea of Emperor Peter the Great to institute a special award for feats of arms was realized by Empress Catherine II. Since her first days of reigning, she began working out a project of a new military order. "ąŚą░ ąĪą╗čāąČą▒čā ąĖ ąźčĆą░ą▒čĆąŠčüčéčī" (For Service and Bravery) is the motto of the order.

It’s for the first time that the origin of the Statute of instituting the Military Order of St George is on display. Empress Catherine the Great signed it on 26 November 1769 (9 December acc to the Julian calendar). On the same day, she solemnly declared herself the Head of the new Order by assigning herself with the insignia first class. The exhibition presents these unique insignias—white enamelled cross pattée with an enamelled image of the Saint, a moiré ribbon and a diamond-shaped star bearing the inscription "For Service and Bravery".

The Moscow Kremlin Museums house a collection of rare insignia of the Order of St George, which was acquired from the Chapter of Russian Orders and court estate in 1917-1922. Commemorative orders that belonged to Russian and foreign monarchs, as well as the so-called "Chapter samples"—etalon insignia, made by jewellers-official suppliers of the Chapter—are of special value. The Order of Saint George was divided into four classes, which were awarded sequentially from the fourth to the first, for feats of arms, bravery, valour and distinction in military service. The Statute said that the recipients had never been charged for the insignia and that it was forbidden to decorate those insignia with precious stones.

Of special significance for the awarded were the holidays of the orders, held on patron days. One can see a vestment of the Knights of the Order of St George— a tabard that was worn on the ceremonial day of the Order, which is the 26th of November.

The last Emperor of Russia, Nicholas II was awarded this Order fourth class on the 25th of October for being in the area of the effective artillery fire during the First World War. The monarch commissioned the House of Fabergé to make an Easter Egg in commemoration of that event and presented it to Empress Alexandra Feodorovna on Easter of 1916. There is a miniature painting inside the Easter Egg, depicting Emperor Nicholas II and his son Tsesarevich Alexey at the position of Russian forces. The miniature is set in a gold frame adorned with the Imperial crown, ribbon and the Cross of the Order of St George.

Tickets are available
- online (only full price tickets);
- at the ticket office in Alexander Garden on the day of the visit.
Ticket office operating hours
- from 9:30 to 16:30