Размер шрифта:
A
A
A 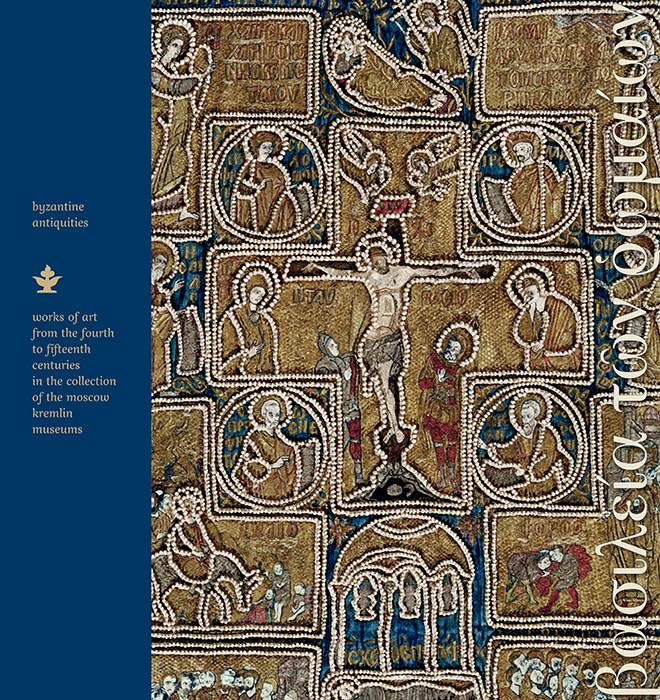 "Byzantine Antiquities: Works of Art from the Fourth to Fifteenth Centuries in the Collection of the Moscow Kremlin Museums". This detailed catalogue of the Kremlin's Byzantine antiquities is a major scholarly achievement, writes Antony Eastmond.

The relationship between Moscow and Byzantium stretches back more than 1000 years. The Byzantine antiquities in the Kremlin museums, one of the great such collections in the world, provide eloquent testimony to the length and importance of that relationship. This magnificent book allows us to trace the material record of those links in extraordinary detail and through superb photographs.

Russia has long seen itself as the inheritor of the mantle of Byzantium: the positions of tsar and patriarch are modelled on the institutions of emperor and patriarch in Constantinople, and the centrality of icons to religious worship is also a Byzantine legacy. The importance of the Kremlin collection lies in the fact that the majority of its objects were the possessions of the grand princes and tsars of Russia, including items of state regalia, and its icons belonged to the churches in which they worshipped in the Kremlin. Very few of the objects entered the collection after the 1920s. They allow us to see the role played by Byzantium in the creation of the Russian state. (In contrast, the Byzantine art in the Hermitage in St Petersburg was mostly bought by modern collectors, making it closer to the collections in museums in Western Europe and the USA.)

The introductory essay sets the scene wonderfully, tracing the history of the relation­ship between Russia and Byzantium from the ninth to the 19th centuries. It charts the embassies and gifts that are recorded as moving across the Black Sea between Constantinople and the Crimea, from the first embassies of Basil I, a century before Christianity was officially adopted in medieval Rus', to the processions and gifts that accompanied the Princess Olga’s visit to the great city in the mid 10th century and the marriages between the Russian princes and the Palaiologan family in the last years of the Byzantine empire. Even after the fall of Constantinople, Russian rulers continued to cherish Byzantine works of art, collect­ing them in the Kremlin, and exchanging gifts with the monks of Mount Athos. Some unsung heroes come to the fore, not least D.D. Ivanov, who worked to save the collection in the 1920s when the tsarist and religious associations of the entire collection made it a target of Bolshevik destruction.

The catalogue itself is presented by medium: metalwork, carved icons, painted icons and embroidery. A number of the objects are star pieces: the 11th-century reliquary of St Demetrios in the form of his ciborium (Fig. 1); the 14th-century steel helmet with gold figural inlay of the Deesis (Fig. 2); the double sided icon of the Virgin and Child (14th-century) with St George (12th-century) on the reverse; or the two great embroidered sakkoses (ecclesiastical garments) made at the start of the 15th century (Fig. 3). Others are less well known, such as the silver gilded dish with a centaur playing the lute that only entered the collection in 2008, or the magnificent set of cameos carved in a range of precious stones, including lapis lazuli, jasper, agate, onyx and chalcedony. The objects have been newly photographed, resulting in the best images available of some of the most famous objects: it is possible to see every thread of the embroideries.

The last section on numismatics is much the thinnest, as the museum's holdings are weaker here, suggesting that trade between Russia and Byzantium was fuelled by barter rather than coinage. The range of trade is revealed by the archaeological finds made during works in and around the Kremlin, notably the wine trade that flourished with Trebizond in the century before the destruction of Moscow by the Mongol ruler Batu Khan and his armies in 1237-41.

A survey of the objects reveals the gradual shift from "Byzantine" to "Russian" art at the start of the 15th century, with a whole series of objects made by Greek and Russian artists in Moscow. This parallels the shift in icon painting from the work of Theophanes the Greek to that of Andrei Rublev at the same time. This is evident, for example, on the golden cover of the icon of Vladimir attributed to a team of Greek and Russian artists working in around 1410, which was only just saved from destruction in 1922 by the curators of the collection. The intricate filigree work that fills the background of the frame is visible in exquisite detail.

Although this is a much larger volume than any of the recent catalogues accompanying exhibitions of Byzantine art (such as those at London’s Royal Academy of Arts in 2008-09, or the Metropolitan Museum of Art, New York, in 1997 and 2004), the book actually contains many fewer objects - only 108 items, plus 30 shorter entries on the items found in excavations in the Kremlin. This gives the contributors ample space for each entry, allowing them to produce a long, careful description and extensive analysis of each object. The entry on the major sakkos is more like an article, and fills 25 pages. This is particularly valuable for the icons: three repaintings of the 13th-century relief icon of the Mother and Child are carefully recorded, as is the subsequent removal of these layers to return us to what is left of the original icon. The entries are remarkably open, listing disagreements and conflicts, but clearly arguing for particular dates, attributions and interpretations. The supporting references are both up-to-date and impressively inter­national. This volume truly integrates the objects in current scholarly debates. The publication, well translated into English, opens up much of the Russian literature on the objects which has remained unknown to too many. This is an essential work for serious scholars of Byzantine and early Russian art.