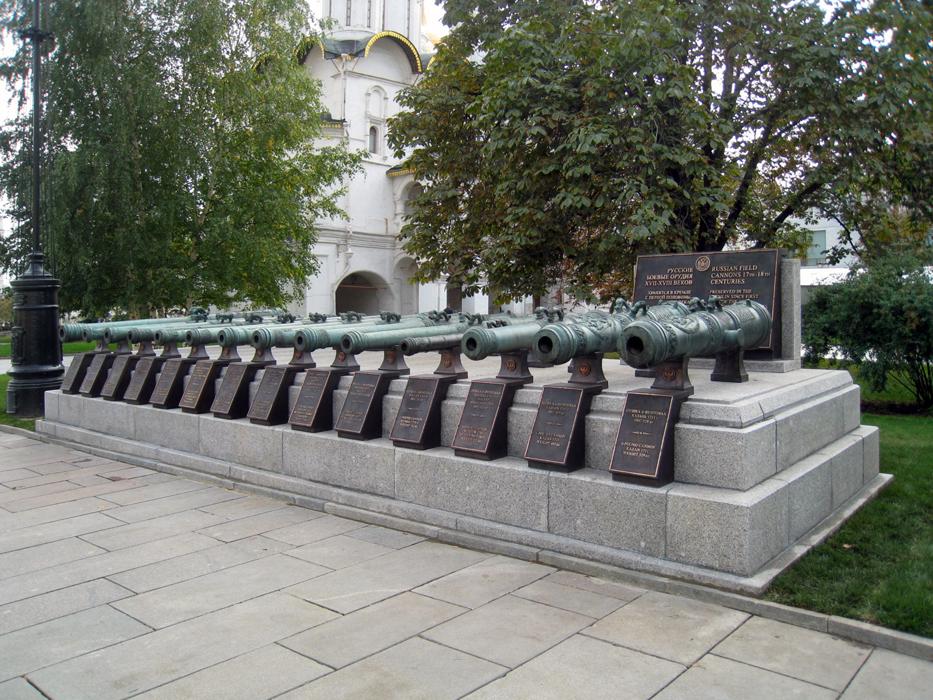 The new exposition, opened in the Kremlin Ivanovskaya Square, near the famous Tsar Cannon, incorporates 14 cannon barrels of the XVIIth — early XVIIIth century from the Moscow Kremlin collection. All the exhibited artifacts are supposed to have been used during military campaigns of the Russian army. Unfortunately, their gun carriages and ammunition were lost. Today the cannons are placed on decorative bronze stands.

The Moscow Kremlin Museums possess the largest collection of artillery pieces in Russia, which numbers about 800 items. With regard to the quantity of artillery rarities the museum occupies the second place just after the Artillery Museum in Saint-Petersburg. The most ancient and remarkable weapons of the XVIth-XVIIIth centuries, including most famous Tsar cannon, were mounted on decorative cast-iron gun carriages in 1830s. Nowadays the 19 pieces of ordnance, mounted on gun carriages, surround the Arsenal building, rising above the captured cannons of the Napoleon's army.

The cannon barrels, incorporated in a new exposition, have been preserved in front of the Arsenal's building till 2012 among the rest artillery pieces. They were marked out to compose a special group of artifacts in the result of the well-directed scientific research efforts and exhibition activities of the Moscow Kremlin Museums.