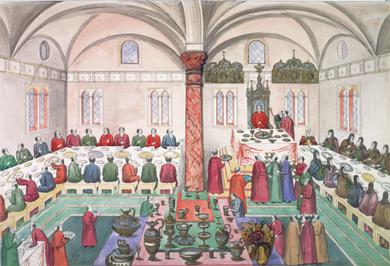 Medieval Russia was famed for its tableware which was one of the most important parts of the everyday life of the Russian people. Executed of rare, precious materials and decorated with delicate engraving, niello and stones, Russian dippers, bowls, goblets and plates are considered to be masterpieces of art.

Only nobility and high-ranking people could possess gold and silver tableware trimmed with pearls and precious stones. The utensils used by the common people had just the same form, although they were made of less "noble" materials, for example wood or clay. Dishware and cutlery were exhibited in special cupboard-dresser "postavets" to demonstrate wealth and power of the owner. 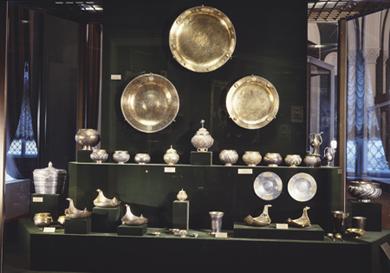 Precious tableware of the Tsars' court served much the same purpose as did the state regalia of Russian sovereigns. According to historical records of the XVIth-XVIIth centuries a great number of different vessels were required as decoration of the table during official ceremonies. Feasts, organized for ambassadors and foreign guests, were the essential part of ceremonial receptions which generally took place in the Faceted Chamber of the Moscow Kremlin. Ostentatious cutlery and dishware were manufactured at the Golden and Silver Chambers and were kept in a special crown office placed between the Archangel and Annunciation Cathedrals. The collection included standing cups (kubok), loving cups (bratina), goblets (kovsh), drinking vessels (charka) and salt-cellars of gold and silver. Also mentioned are utensils of semiprecious stones (crystal, agate, cornelian, jasper) and exotic materials, such as coral, mother-of-pearl, coconut shells and ostrich eggs. Many of these articles were of foreign manufacture and were brought by foreign traders or purchased abroad for the Russian court.

Another place for demonstrating precious tableware was the Cross Chamber of the Patriarch's Palace in the Kremlin, erected for Patriarch Nikon in the XVIIth century. Here Patriarchs received Tsars, foreign guests and ambassadors; it was also the scene of meeting of the Church Council. Various church plate was executed in the Patriarch's workshops and kept in the Treasury, i.e. embossed cups and goblets of gold and silver, dishes and platters decorated with engravings, enamels and etc.

Utensils were often used as gifts, honorary awards in Russia and implements for religious ceremonies. Therefore tableware of the Old Rus, preserved in the Armoury collection, is referred to masterpieces of national art; it reveals important aspects and peculiarities of the Russian Medieval culture.