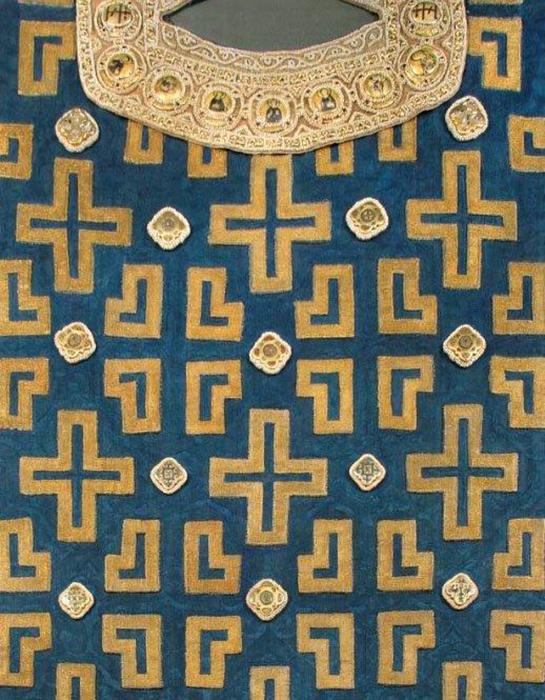 One of the precious masterpieces of the Russian embroidery - the sakkos of Metropolitan Alexius of Moscow - is on loan to the State Hermitage Museum, Saint-Petersburg, from the Moscow Kremlin. The project is carried out within a programme of the St. Petersburg International Cultural Forum 2014, dedicated to the 250th anniversary of the State Hermitage.

The exposed sakkos (or dalmatic, phelonion, worn by Orthodox bishops) belonged to Alexius, Metropolitan of Kiev and all Russia in 1354-1378, one of the most venerated historical figures in the country. Nowadays this finest example of the Russian school of decorative embroidery of the XIVth century is undergoing restoration, which is about to be successfully completed by the museum’s specialists.

Metropolitan Alexius was a distinguished politician and statesman, who contributed greatly to the development of the Russian State and Russian Orthodox Church. Having been a spiritual tutor of young Dmitriy Donskoi, he has served as an actual governor of Moscow Rus during many years. Alexius was buried in the Chudov Monastery (Monastery of the Miracle at Chonae) and canonized by the Russian Orthodox Church in 1448 as one of the patron saints of Moscow.

The history of the sakkos is full of mysteries. According to a legend, it was gifted to Metropolitan Alexius by the Tatar Queen Taidula, healed by him from blindness. Having seen the Metropolitan wearing this vestment in her dream, Taidula ordered to sew the sakkos for the saint’s arrival. The sakkos is also believed to have been entombed along with Alexius, but after uncovering of his imperishable relics the vestment also turned out to remain undecayed.

For several centuries the sakkos has been preserved in the Moscow Kremlin. In 1918 it was included to the museum fund to become one of the precious exhibits within collection of ancient fabrics and vestments of the Armoury Chamber. During the restoration process it was discovered that the vestment had been renovated and redesigned earlier, which testifies the fact that the sakkos could have been used during divine services for many centuries.

The sakkos of Metropolitan Alexius of Moscow is a real masterpiece of high artistic and historical value, which is remarkable for the beauty of materials and decorative techniques peculiar to the Russian ornamental embroidery.