the Museum of Victory, Moscow 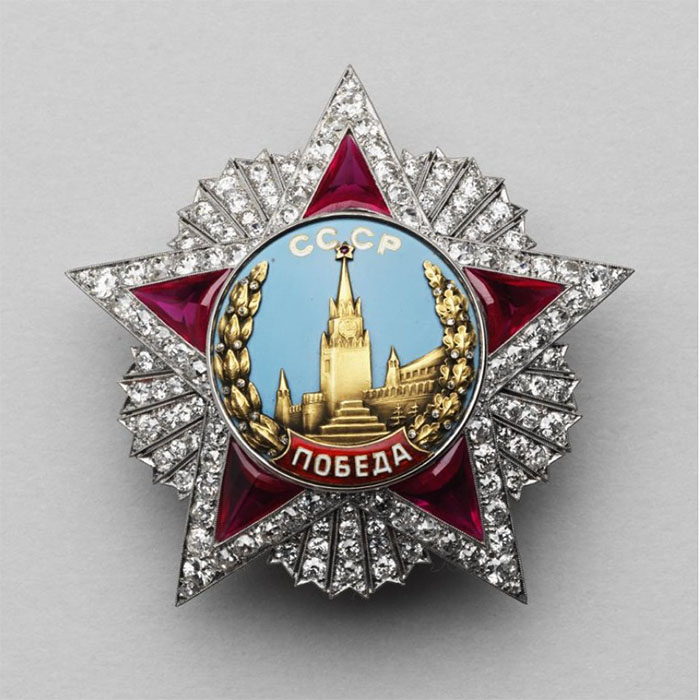 It is for the first time that the Moscow Kremlin Museums present Marshal F.I. Tolbukhin's Order "Victory" at the memorial exhibition dedicated to a single masterpiece in Yaroslavl State Historical, Architectural and Art Museum and Heritage Site.

A Commander's Supreme Military Order "Victory" was established on 8 November 1943, when battles were still taking place on the Soviet territory. It was conceived as a valuable award, each order was to contain approximately equal amounts of gold, platinum, diamonds and rubies. The level of execution of the order is unique - it is remarkable for its conciseness and precision of symbolism, the highest value of materials and quality of jewellery work, despite the short time between the development and implementation of the project. One hundred and seventy-four diamonds adorn the insignia entirely made of platinum; the base of the central medallion and the overlay with the inscription "Victory" under the enamel are made of gold. All the overlay details—images of the Kremlin wall, the mausoleum, oak and laurel branches, inlaid with small diamonds—are made of gilded platinum. Silver is used just for fixing elements on the backside of the decoration.

The Order "Victory" is the only Soviet award, which was produced not at the Mint, but the Moscow Jewelry and Watch Factory, famous for its masters.

The highest military award of the Soviet Union, created by artist Alexander Kuznetsov, is the rarest in the world. It was only for twenty times that the order was bestowed: it was awarded to seventeen recipients—twice to three of them, and once was deprived posthumously.

Fyodor Ivanovich Tolbukhin (1894-1949) - a native of the Yaroslavl province (now Yaroslavl region), fought on the battlefields of World War I, distinguished himself during the Brusilov Offensive, was awarded the Order of St Anna and St Stanislav for his military services. During the Great Patriotic War, he led the army in the Battle of Stalingrad, commanded the troops of the Southern (transformed in 1943 into the 4th Ukrainian Front) and the 3rd Ukrainian Fronts. In the military historians' opinion, F.I. Tolbukhin's feats have been underestimated in many respects; however, Moscow saluted thirty-four times the victories won with his participation. He was the only Soviet commander who took part in liberating from fascists five European capitals: Vienna, Belgrade, Budapest, Bucharest and Sofia.

The highest military order "Victory" was awarded to Marshal of the Soviet Union F.I. Tolbukhin on 24 May 1945 for the liberation of Austria and Hungary. It was awarded to him according to the Decree of the Presidium of the Supreme Soviet of the USSR signed on 26 April 1945 with the wording "for skilful fulfillment of the tasks of the Supreme Command on running large-scale operations, which led to an outstanding success in defeating the armed forces of Nazi Germany".