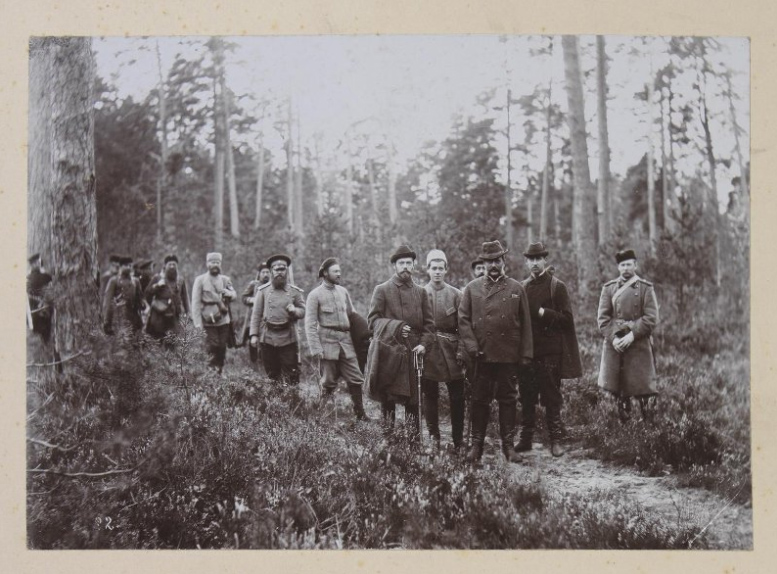 The Moscow Kremlin Museums take part in the exhibition "Imperial Hunt of Past and Present. Collection of the Romanovs' Hunting Trophies" at the State Darwin Museum. A unique hunting trophy collection of Emperor Nicholas II and members of the Imperial Family from the Belovezhsky Palace is on public display for the first time. The fate of the hunting trophies from the Belovezhskaya Pushcha remained unknown for many decades, until 1990 when the Darwin Museum was moving into a new building on Vavilov Street. They were accidentally found in the pedestal of a stuffed bison, which also happened to be a trophy of the imperial hunts. Horns of the trophies decorating walls of the Imperial Palace in Belovezhskaya Pushcha were evacuated to Moscow during World War I as part of the palace properties. The first director of the Darwin Museum A.F. Kohts asked to give them to his museum, but it is not known when and how exactly they arrived there. The monograms of Nicholas II and other members of the Royal Family members on the frontal bones of the animals were carefully concealed with whitewash, indicating that at some point, the trophies were deliberately "depersonalized" for their preservation.

Visitors to the exhibition at the Darwin Museum have a unique opportunity to see the trophies together with artistic and photographic chronicles of the Imperial Family stay in Belovezhskaya Pushcha depicted in watercolours and photographs of the royal hunting from the collection of the Moscow Kremlin Museums. Like the hunting trophies of the Darwin Museum, these drawings and photographs originate from the Belovezhsky royal estate. In 1915 the objects and documents were transferred to Moscow and placed in the Alexander Palace in Neskuchny Sad, and in 1918 they were moved to the Kremlin.

The boards represent a unique watercolour of Alexander II's first royal hunting in Belovezhskaya Pushcha in 1860 and a photograph of the monument erected in memory of that hunt – a huge cast-iron figure of a bison on a pedestal. Several photographs of the Belovezhsky Imperial Palace built on the bank of the Narevka River in the heart of the Belovezhskaya Pushcha show a 'beautiful and comfortable house' designed following Emperor Alexander III’s wishes. It was an example of 'simplicity, taste and convenience' according to the words of his heir, Nicholas II.

Of particular interest are drawings by Mihály (Mikhail Alexandrovich) Zichy, the court painter of four Russian emperors. At the exhibition, you can see several pictures of the imperial hunts in Belovezhskaya Pushcha in 1897 and 1900 from his albums. Usually, the artist sketched several events on one sheet of paper and each of the scenes turned out to have its mood and emotional colouring.